Tuesday, October 10, 2017:  A silver Nissan was traveling east on 45th street in West Palm Beach past the Magnolia Park Train station when it arrived a the light at Australian Ave.  There a blue VW ran the stop light and a collision occurred.  A white Ford F-150 was unable to and hit the Nissan. 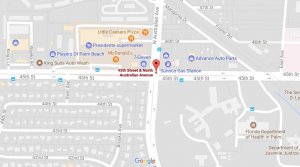 The West Palm Beach Police were called to the scene and also Palm Beach Fire Rescue.  Two people were taken away by ambulance to St. Mary's Hospital which was only a few blocks from the scene of the accident.

More information will be publish as this breaking traffic incident story develops.

Attorney Jason Weisser of Shuler, Halvorson, Weisser, Zoeller and Overbeck responded about the crash.  “Whenever you are behind the wheel of a car, please make sure you are paying attention to all road signs and signals.  If you are in an accident where someone didn't follow the posted signs or signals, please call me so that we can discuss your rights. ”.